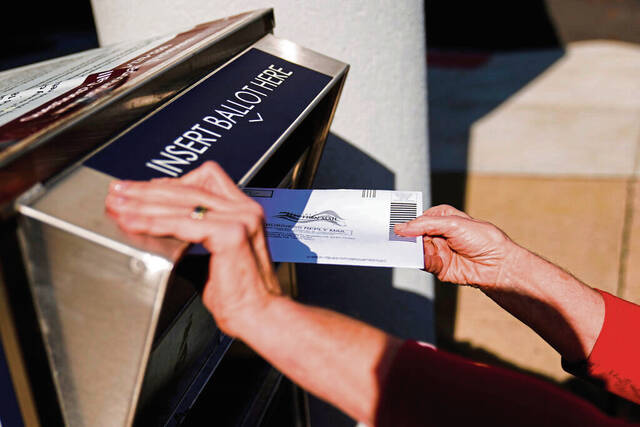 A person drops off a mail-in ballot at an election ballot return box in Willow Grove Oct. 25, 2021. AP

The commonwealth’s 2022-23 budget and legislative package delivered many things for Pennsylvanians, but one of the most significant yet underlooked items was an issue that many Pennsylvanians said mattered most: election integrity.

The election integrity package recently put forth in Pennsylvania engages both the legislative and constitutional amendment processes. Through legislation, now Act 88, the state banned third-party, dark money from influencing elections. And popular provisions like voter ID and election audits moved one step closer to reality and will remain a decision for voters through the constitutional amendment process.

A Muhlenberg College poll found 40% of voters didn’t trust the results of the 2020 election, which proved accurate based on constituent contact with our offices. Rulings by the Pennsylvania Supreme Court and measures advanced by the Pennsylvania secretary of state were a source of that distrust and confusion.

In the final months leading up to the 2020 election, the Pennsylvania Supreme Court changed our commonwealth’s election law (Act 77) based on a series of suits filed, including one by the Pennsylvania Democratic Party. Although Act 77 was already codified in law with bipartisan support from the General Assembly and governor, the Pennsylvania Supreme Court ruled in favor of the Democratic Party and others. Opting to legislate from the bench, the court added drop boxes with no security parameters, allowed for mail-in ballots to be accepted three days after the election night deadline, and threw out signature requirements on mail-in ballots.

To complicate matters, and without input from the Legislature, 13 of Pennsylvania’s 67 counties and the Pennsylvania Department of State received third-party, privately funded money in the amount of $22.5 million from Mark and Priscilla Zuckerberg’s Foundation, the Center for Tech and Civic Life. These grants provided election services, including counting ballots and purchasing drop boxes, which were instituted by the court ruling. These grants were awarded with bias through a process shrouded in ambiguity. For example, Philadelphia was awarded $8.83 per voter while Venango County was awarded 64 cents per voter. Adding to the confusion, the Pennsylvania secretary of state sent out guidance permitting the counties to “cure” ballots, which resulted in each county handling ballot counting differently. The culmination of these actions cast doubt in our election process with Pennsylvanians regardless of party.

In an effort to restore faith in our election process in the commonwealth, the Legislature advanced three important measures with bipartisan support as part of this year’s budget process. First, Act 88 of 2022 bans private election grants bankrolled by partisan groups and instead establishes a state-funded grant program for counties to hire staff, print ballots and manage voting machines. Second, voter ID — 35 other states already have a form of voter ID; it’s a practical measure considering all the things one needs an ID to do. Third, election audits, which would require the General Assembly to establish election audits to be performed by the auditor general.

The voter ID and election audit measures will be decided by the people through the constitutional amendment process. Many may ask why we are proposing a constitutional amendment instead of going through the legislative process. The answer is simple: This gives the people the final say in the process because the governor will not sign either of these reforms despite overwhelming support by Pennsylvanians.

When it comes to voter ID, a June Franklin and Marshall poll showed 74% of voters favored voter ID and 81% supported signature verification. As for election audits, it is another critical layer of election security, and one that was originally included in the previous budget but removed by the governor with his veto pen.

The actions taken by the Legislature go a long way to ensuring the security of future elections. While there is still work to be done, Pennsylvania delivered one of the most significant election reform packages to date.

Support Local Journalism and help us continue covering the stories that matter to you and your community.