On November 4, 2022 a woman was arrested by Florida Department of Law Enforcement's Election Crime Unit. She had voted in both Florida and Alaska multiple times. SOS Byrd, Governor DeSantis, and Attorney General Moody applauded these steps to enforce election integrity and show that Florida is serious in regard to having crime free elections. 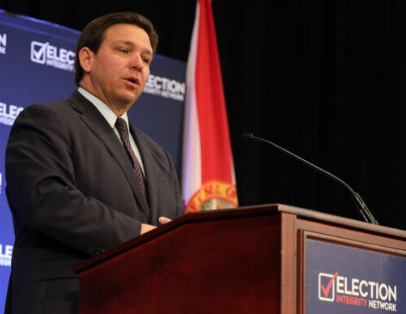 ERIC is an electronic registration system paid for by 31 states. One would think it would be helpful in this type of scenario but apparently it only finds voters who have not registered to vote and does not say a word about voters who are "double dipping".

Let's go back and look at an article byJim Hoft on the Gateway Pundit about ERIC on January 20, 2022.

The 31 states who are members MUST give ERIC updated info every 60 days from the Motor Vehicle Department. This means EVERYONE who can legally vote or can almost vote, registered or not. ERIC gets their names, addresses, DOB, license number, last 4 of social, voter activity, phone, email, title, citizenship documents, and more.

States who join are then mandated to contact people in order to register them to vote. (Not clean up the rolls).

States do not have to clean up their rolls. And states are not to tell ERIC anyone who is illegally voting or if someone is a "non-citizen". 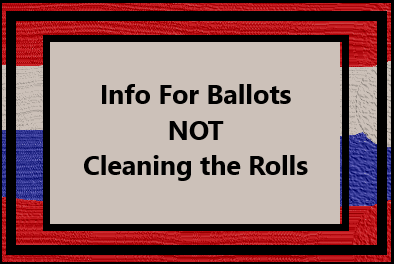 States pay $25,000 to do this but following mandates and paying dues raise money paid to ERIC per state to possible millions.

ERIC uses a program to compare information with the United States Post Office and Social Security death records. It is unknown what they do with that information but do have partnerships. Even Secretary of States said they have asked but are not told.

ERIC wants information on all the provisional ballots (these are ballots that had to be cast because of problems).

ERIC wants to know who registered, updated data, and voted on the same day.

ERIC wants to know whether registrations are electronic or paper. 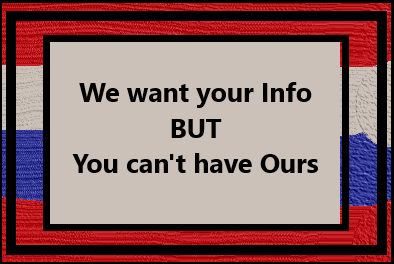 States belonging to ERIC say they cannot share their data because of ERIC contract. Federal law MANDATES this maintenance of voter rolls is public. This is not information which can be FOIA'd but requires the citing of Federal law U.S.C. 20507(i)(1) 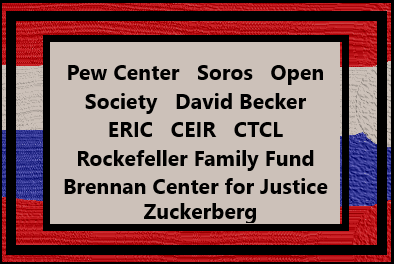 David Becker, Democrat election lawyer, used funding from Pew Center and Soros Open Society to create ERIC. Later he went on to make CEIR  and gave out $70 million from Zuckerberg for the 2020 election using CTCL methods.

Any competitors were shut down and currently ERIC is holding the keys to information. States must join ERIC to get connected information. ERIC knows everything to do with an election: who sees records, who votes, and who observes.

Soros partnered in 2016 with Rockefeller Fund for changes in registration. Soros also gave money to the Pew Center and Brennan Center in regard to maintaining voter lists. The focus was on allowing non-citizens the ability to vote. 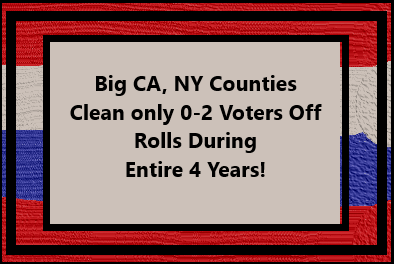 Voters Not Being Removed

Judicial Watch discovered that large counties had not taken voters off the rolls during an entire 4 year period. Some took off only 1 voter and some two voters. Here is some of what they found.

Brooklyn with over 1.7million voters--zero removed

Judicial Watch is bringing suits to states to follow laws. The founder of ERIC is David Becker, He has worked with the DOJ Civil Rights Voting, People for the American Way (Focused on shutting down conservatism), and Director of Election Intitiatives at Pew (left leaning). 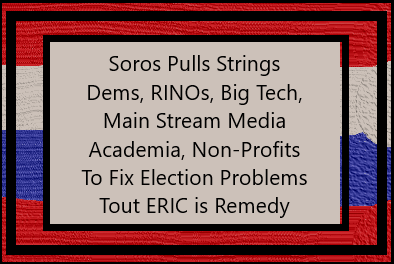 With the backing of Pew and Washington state, Thurston County auditor and then SOS, Wyman and Hamlin and grants from Transparency & Integrity Fund (George Soros Open Society) and an anonymous donor--ERIC began.

ERIC was funded by the member states.And Wyman went to Soros leadership training program. Since 2012 Washington state has been run by these two.

Pew Center pushed the narrative of inaccurate, costly inefficient voter rolls and this started liberal states on path to ERIC and becoming paperless registrars. Universities published many papers in regard to voting registration problems.

ERIC was sold as enabling states to find citizens who have not registered.  ERIC was pushed at IBM conference, along with Schumer's help. 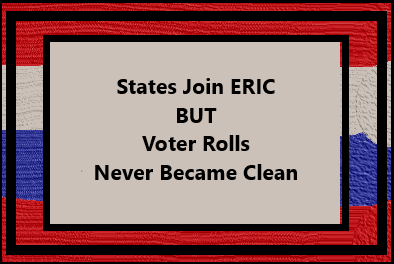 Designers and the many groups involved are connected with Democrat donations and "the machines" Dominion and ES&S.

The designers of ERIC also built Senzing which coordinates the data between the states and runs ERIC.

Haas has been a System Engineer for last 9 years at ERIC, working with Lindback in Oregon, and shares a seat on the Elections Infrastructure Sector Coordinating Council along with Dominion, ES&S, Smartmatic, and Unisyn Voting.

SCC is representative of 30 companies providing items for our elections. They work with GCC (CISA, EAC, NASS, NASED). 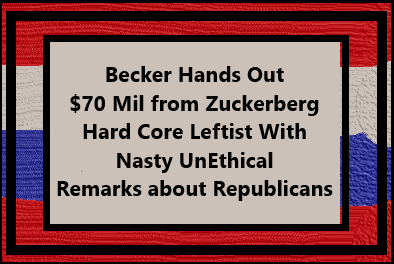 Going back to David Becker. He gave out almost $70 mil of Zuckerberg funds in 2020 following CTCL.

Someone made an ethic complaint about David.  “It’s the most unethical thing I’ve ever seen. He’s a hard core leftist who couldn’t stand conservatives. Emails revealed nasty, disparaging remarks about Republicans…unethical and unprofessional”. He was removed from working with the DOJ.

In 2013 ERIC was evaluated and found to have increased voter registrations by 8 out of 10,000. Nothing to brag about. The second report was not even made public.

While the write-ups for the grants sound like pure America First conservative values, organizations and money surrounding ERIC help only one party, the Democrats.

Go to the actual article to read more and get links to leaked documents.

Kat Stansell Interview about ERIC on The New American September 30, 2022 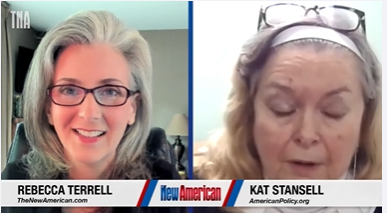 ERIC is not about "Cleaning up voter rolls"-- the Left considers that "Voter Suppression".

Becker fired from the DOB because of ethics charges, founded ERIC and also defended crooked poll workers and officials using lawyers from CEIR and financing them with Zuckerbucks.

ERIC gathers millions of names in a data base which is morphing into a national voting organization.

Supposedly, ERIC would provide lists of who moved and died so voters can be removed.

Instead it collects all types of data on voters and workers. Lists of who moved to different ERIC states, within an ERIC state, and who is unable to vote because of medical or prison,  Within 60 days ERIC requires states to solicit all eligible voters to register to vote.  So while they have a lot of new voters, ineligible voters are rarely removed.

18,000 pieces of mail were in the Director of Election office in trays with return to sender stickers. However those addresses somehow received ballots and voted.  How can 18,000 ballot be counted when the people don't live at those addresses? This is being looked into right now.

Cannot resign from ERIC within 90 days of an election.

Michigan and Wisconsin are suing because of the "Help America Act" requires that states handle their own voter rolls. The data is not supposed to be given to someone else.

Louisiana left ERIC in July due to citizen pressure citing problems with unknown actors in control of citizen data.

What you can do--- be a VIP voter--Vote In Person, on election day, and never by mail.

Early and Mail In Ballots are used for manipulating the vote.

Kat Stansell posts her work at AmericanPolicy.org and highly recommends the Activist Handbook by Tom DeWeese.

RE: Report on ERIC

I am the chairman for the Election Integrity Committee (EIC) with County Republican Executive Committee (ECREC) and live in your district.

I have written before in regard to the Electronic Registration Information Center (ERIC) and would like to bring some additional information to your attention.

On November 4, 2022 a woman was arrested because she has been voting in both Florida and Alaska over the last several years. This along with previous felons who were arrested for voting although their rights had not been reinstated sends a message to would be election “hackers” that Florida is serious in regard to election integrity.

How can such a thing happen while Florida uses ERIC?

Whereas, ERIC demands states give it detailed information on millions of voters, about-to-be voters, and workers/staff, recorders, and observers and DOES NOT say what it does with that information or how it protects that information, not even answering Secretary of States,

Whereas, ERIC wants not just personal information but also how each voter votes, when they vote, and if they use electronic or paper registration,

Whereas, ERIC does not mandate the cleanup of voter rolls but only the registration of voters (whether they are a citizen or NOT),

Whereas, ERIC is costly and can cost states possibly millions of dollars,

Whereas, Judicial Watch found that many large counties using ERIC had not removed ANY voters and at the most 2 voters during a period of 4 years,

Whereas, ERIC initially was only desirable by Democrat states until time that a free program Crosscheck was made illegal and liberal media and Schumer continually pushed how desirable ERIC would be,

Whereas, Judicial Watch found seven states using ERIC with counties of OVER 100% registration,

Whereas, ERIC's designers are connected with not only Democrat funding but also electronic voting machines such as Dominion and ES&S,

Whereas a 2013 evaluation of ERIC found it had only increased voter rolls by 8/10,000 people and a followup investigation was buried and the result is unknown,

Whereas, ERIC is made to sound like true pure America First conservative, but the values, organizations and money surrounding ERIC only help one party, the Democrats,

Whereas, linked documents are found in this regard,

Whereas the “Help America Act” requires states to handle their own voter rolls and NOT give that data to others,

Whereas, ERIC does not allow states to leave their contract within 90 days of an election,

And whereas, Louisiana did leave ERIC citing issues with unknown actors in control of citizen data

Be it resolved, on behalf of the County Republican Executive Committee Election Integrity Committee, I respectfully demand the removal of Florida from working with ERIC in any way at the earliest time that is applicable to the contract.

Please respond in what way ERIC may be removed from Florida; how you are facilitating its removal, and advice you can give to this organization to help us in this regard.