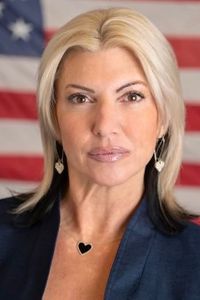 Tina Forte grew up in the Throggs Neck area of the Bronx. She learned the value of hard work and love of country from her father, a Marine Corps veteran, and her mother, an entrepreneur. Tina learned that through perseverance and hard work, she could achieve the American Dream.

As a small business owner, wife, mother, and grandmother, Tina Forte understands the issues facing New Yorkers. Time and time again, politicians talk, make promises, and fail to deliver – Unemployment is still high, inflation is squeezing family budgets, crime is on the rise, taxes keep going up, and our schools continue to fail our students. Tina has been a vocal activist, fighting for families, and calling out hypocritical politicians. She has raised awareness for veterans issues, fought against draconian lockdowns and mandates, demanded schools open for students, and always supported our law enforcement.

Radical socialist politicians routinely degrade America and the dream it represents. They’ve vilified and defunded our law enforcement, creating a crime surge, while cowering behind their own private security. They’ve destroyed businesses, driven away jobs, and offered little compensation to those affected, while enjoying their own large government salaries. They have robbed children of more than a year of education, denied school choice to those of us who want to give our kids the best education – all while sending their own children to private schools.

Like millions of other New Yorkers, Tina Forte has had enough! Tina has been on the front lines fighting for us. She stood shoulder to shoulder with small business and restaurant owners who were struggling. She joined parents in pushing for schools to reopen for our kids. She backed the blue, and was a vocal opponent to defunding our police. She was even part of lawsuits against Governor Cuomo and Mayor DeBlasio to roll back the Unconstitutional executive orders that have destroyed our businesses and the lives of our children for almost two years.

Tina Forte has fought for us here in New York, and she will continue the fight in Washington to stop radical socialists from destroying the American Dream.

Tina Forte has always backed the blue. From beat cops to detectives to school
security, Tina has been unapologetically supportive of law enforcement.

Tina condemns politicians like AOC and Bill De Blasio who have abused their pulpit to attack officers who have dedicated their lives to protect us – all while using tax dollars to pay for their own armed security.

AOC and her socialist allies have pushed for defunding our police and the
disastrous “bail reform” policies which have caused crime to skyrocket in New York.

Tina Forte will fight back, for us. She will fully fund our law enforcement and push to end dangerous bail reform policies.

Tina is a staunch supporter of Police Reform measures such as Senator Tim Scott’s police reform bill. This bill would have provided better oversight to remove bad cops and reward good cops. This common-sense reform was rejected by AOC over partisan bickering, and unreasonable demands to defund the police.

Tina also supports criminal justice reform to improve lives and save tax dollars.
Reforms should include expunging the criminal records of non-violent ‘offenders’ whose crimes are no longer violations in their home states. For example, this would mean expunging the records of non-violent charges for marijuana possession as the state has fully legalized it as of 2021.

New York led the nation in coronavirus deaths because of the deceit and criminal negligence of politicians like Cuomo, De Blasio and AOC. Tina was almost one of those New York fatalities.

Prescribed treatment by her primary physician, she was denied access due to politically-motivated, anti-science edicts.

This resulted in Tina’s hospitalization and near death. Thousands of New Yorkers lost their lives – either through denial of life-saving treatment, because they were trapped in nursing homes, or stuck in overcrowded low-income housing in our poorest neighborhoods. New York’s coronavirus fiasco was a failure of radical Socialists and New Yorkers suffered the consequences.

Tina believes that people should be allowed to make their own healthcare decisions, without government interference. She will support common sense reforms to lower healthcare costs and improve accessibility for all.

We are a nation of immigrants, and better because of it. Tina is a strong supporter of legal immigration, and believes the process for those seeking to come to America the right way should be streamlined – particularly for skilled workers needed to grow our economy.

Tina will fully fund Customs and Border Protection (CBP) and Immigration and
Customs Enforcement (ICE). Tina also supports the completion of a barrier to deter illegal immigration and stop human trafficking across our Southern border. She will push to restore the valid international agreements previously enacted with our Central American allies – including the successful “Remain in Mexico” policy.

As a small business owner in the Bronx, Tina has fought for creating and protecting New York jobs.

AOC has spent her time raising taxes, bad-mouthing business owners, and pushing away large employers like Amazon – denying thousands of jobs to New Yorkers and harming our economy.

Tina and her husband started with a soda delivery route and went on to build their own beverage distribution company. Now, they’re not only creating jobs but empowering others to create their own businesses.

Tina supports School Choice. This includes charter schools and vouchers so that parents can choose where their child will be best educated. Tina believes
competition improves all schools, including traditional public, charter, and private.

AOC has used her connections to get her own relatives into a charter school while pushing to deny that option to other parents. Tina supports providing parents a variety of choices in pursuing the best education for their children regardless of race, gender.

The daughter of a decorated Marine veteran who earned a Purple Heart for his
service in the Korean War, Tina understands the sacrifice our veterans endure to preserve our freedom at home. They are the backbone of our freedom.

As your Congresswoman, Tina will work tirelessly to ensure our heroes get the respect and care they deserve. She will achieve this through preserving and improving the Department of Veterans Affairs along with support organizations like Wounded Warriors that help transition veterans back into society.