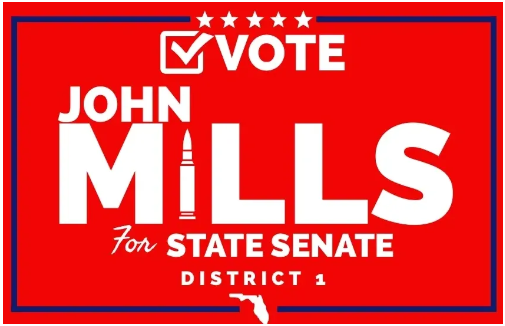 VALUES YOU BELIEVE IN

As a U.S. Navy pilot, I took an oath to serve America. I swore to defend and uphold the Constitution. It was my duty and honor to do so. My interest is the same; to serve and uphold the principles that we hold dear. May God bless you and may God bless Florida. Send me to Tallahassee to fight for your values!

A LIFETIME OF DISTINGUISHED SERVICE 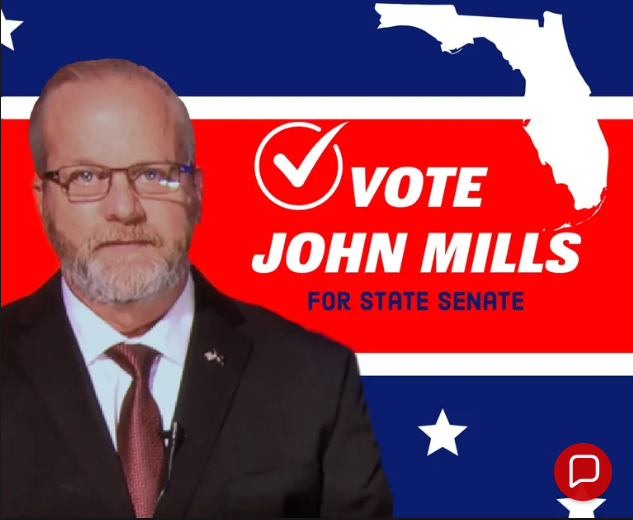 On Day 1, John Mills will file:

John will not just file these bills, he will fight every day for their passage.

In the last two legislative sessions, a bill to pass Constitutional Carry was filed in the House, Broxson could have filed the same bill in the Senate. HE DID NOT!  As the NRA said, Senator Broxson no longer deserves your trust.

Doug Broxson was one of seven Republican Senators who were committed to vote against SB-7026, as long as it had any gun control provisions in it.  But when Broxson broke his word and switched his vote, instead of the bill dying on a 19-19 tie, it passed 20-18. Broxson's selfish betrayal cost law-abiding gun owners an essential part of Freedom, Liberty and Second Amendment rights.

Republican legislators are responsible for passage of the "gun control bill." They lacked the courage to uphold their oath of office and keep their word to constituents who voted for them. They were in total control. They no longer deserve your trust.

Senator Broxson had every opportunity to right his wrong. He could have filed bills in the last 4 legislative sessions to file a bill to repeal the bad parts of SB 7026, HE DID NOT.

John Mills truly cares about his community, the needs and values of his constituents, and the preservation of our liberties. He will be an ally to Governor DeSantis’s strong leadership and commitment to the fundamental principles of the Republican Party Platform.

His Opponent, Senator Broxson’s voting record put him in direct opposition to our Governor, Ron DeSantis. Broxson joined Senate President Wilton Simpson in opposing Governor DeSantis’ proposed congressional maps, resisted fulfilling his $100 billion-plus state budget and even told the Governor NO when Governor DeSantis wanted to give 5 months of relief to Floridians at the gas pump.

Florida needs a Senator that will stand up to the Special Interests and lobbyist influence.  John's only special interest is YOU -  the citizens of Florida, US Constitution, and the Florida Constitution!

Unlike his opponent,  John Mills nor his votes will never be for sale, and neither will his office be up for sale. John will not partake in pay-for-play where passing legislation is in exchange for HUGE donations from special interest. Senator Broxson through his Political Committee has shown that he will do the bidding of Special Interests and not the interests of the citizens of District 1.

GET OUT THE VOTE!

If we join together and make our voices heard, we can fight for the change we want to see!

We love our supporters, so please join our team!

Volunteers are critical to the success of any campaign. Please enter your information to sign up to help me fight for values that ensure our continued liberty and prosperity.

John Mills is a Navy Veteran. Use of his military rank, job titles, and photographs in uniform does not imply endorsement by the United States Navy or the Department of Defense.

✓ Religious Liberty – Stronger families, sanctity of life! The government has no place intruding upon the closely held religious rights of the people! The freedom to practice according to one’s values is what makes American families strong and ensures future prosperity of our great nation! We must fight to protect your religious liberties from those who infringe upon them!

✓ Election Integrity -- Our election systems need to be fixed. There is a lot of fraud and election integrity is a MUST. It is too easy for fraud to occur with mail in ballots. We need to back to manual count at the precinct level.

✓ 2nd Amendment – Shall not be infringed! The right to bear arms is critical to ensuring that our government remains one that is of the people serving for the common good. The rights of the individual, much like the rights of the state, must be able to be defended if we are to ensure liberty and justice for all men.


✓ Healthcare – Free market solutions! Freedom of choice in healthcare is imperative, including keeping medical choices between patients and their doctors. Government intrusion in the free market (Obamacare) has done more harm than good. Free market solutions create healthy competition that in turn drives prices down and quality up.


✓ Taxes – Reduced and Constitutionally constrained! The federal government has several unique responsibilities which require funding such as national defense and regulation of international trade, but unfortunately the federal government has far outgrown its intended scope. This rampant growth of federal bureaucracy is like a financial anchor around the neck of our great nation. I believe in lowering taxes for all Americans by eliminating bureaucratic waste and limiting the reach of the federal government to only those functions for which it is needed.


✓ National Defense – Peace through strength!  Our borders remain unprotected and vulnerable to heavily armed narco-drug gangs from across the border and our nation becomes the playground to foreign espionage and subversion. Border security is a must!


✓ Economy – Free markets and sound money! Free market prevails over government regulation. The less government intervenes in the economy, the stronger the economy becomes. Businesses are never too big to fail and America needs the return of sound money as found in the Constitution.


✓ Energy – Free up our vast American resources! The Department of Energy was established in 1977 when our country was importing 30% of its energy needs. The department was to help make our country less dependent on foreign energy sources, particularly oil. Now over 40 years later, our dependency on foreign energy sources has more than doubled to nearly 70% of what we need, much of it from countries that despise ours. The Department of Energy, in cooperation with other federal agencies, actually blocks acquisitions of tremendous energy resources within our own nation’s borders. In fact, the entire government program that deals with energy is flawed and is making energy sources less available and less usable for an industrial nation.


✓ Education – Choice and parental rights, NO to Common Core! Choose freedom and stop Common Core! Education is an integral element of a free society. America must preserve parental control of education by stopping the top-down imposition of national standards on public schools, private schools, and home schools if liberty is to prosper. It is imperative that the voice of parents in their children’s education remains free and unabridged by government usurping. It is only through education that there can be a well-informed populous. With the help of God, education is the key to a better world. 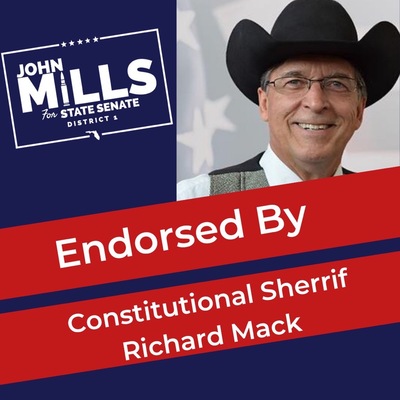 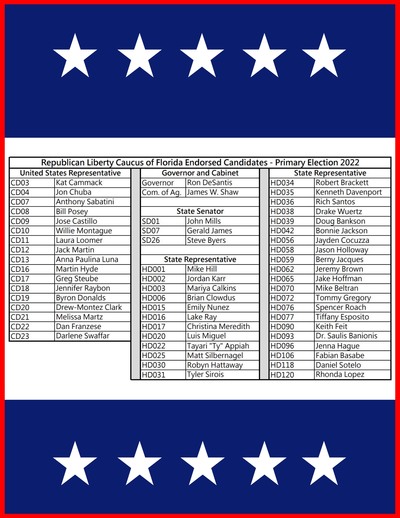 The Mike Bates Show
8/13/22 Segment 3: How Florida Senator Doug Broxson Betrayed His Constitutents and the Constitution