Our mission is to confirm that every eligible vote is counted as the voter intended by working with elections officials to ensure that elections are secure, transparent, robustly audited, and publicly verified.

evidence based elections = confidence in elections

“The principle of ‘evidence-based elections’ is that local election officials should not only find the true winner(s) of an election, but they should also provide the electorate convincing evidence that they did.” - Andrew Appel & Philip Stark

Here is one instance where insider fraud may have been detected had the public made an effort to observe/photograph the zero & results tapes.

"The Bald Avenger" (a.k.a. Jason Sisernos) and Lynn Bernstein discuss why a lack of confidence in election results is a major threat to democracy and what ‘we the people’ can do about it. Lynn also talks about how she became a whistle-blower following the 2020 Primary Election and was subsequently fired as the Lead at-large Observer Coordinator for the Wake County Democratic Party for exposing the illegal ballot processing that was going on in Wake County and throughout NC.

Fortunately, after months of advocacy work on Bernstein’s part, the NC State Board of Elections reminded all counties that this long-standing practice of approving, opening and “holding ballots” without scanning them would no longer be allowed, as it violated the NC General Statutes. The law states that ballots must be approved, opened AND scanned in front of the public at the same meeting.

Jennifer Cohn, an election security advocate, political writer and attorney talks with Lynn Bernstein about threats she received from the Wake County Election Director when she went to the Wake Board of Elections building on the night of the 2020 Primary to view the absentee and early voting poll tapes.

According to “Freedom to Tinker", in an article by Andrew Appel, it appears that ES&S has allowed grad undergraduate students access to pen test their electronic voting system AND disclose the vulnerabilities that they’ve found.

So why is NCSBE trying to limit experienced election systems experts the ability to do the same?

“The students were interviewed by ES&S, allowed ES&S to inspect their testing site, and then signed a nondisclosure agreement with ES&S. The students made up two attack scenarios, then spent 10 days trying to find attacks. They found some vulnerabilities, but not one that could change votes.”

Right after the 2020 Election*, we set out to image all the poll tapes in the state, but we had to put the project on hold several times due to covid. Unfortunately, these tapes will be destroyed in Sept 2022.
Federal Law requires that all election materials be saved for 22 months following any federal election. This means that all the poll tapes are set to be destroyed in Sept 2022.
Sign up here to help #ValidateTheVote by imaging poll tapes in your county.
*imaging poll tapes will not have any impact on the 2020 election outcome. The tapes are being imaged because they are part of the election record that we routinely get collect post-election. Every tape we imaged in Wake County for the 2020 election matched what the state reported so we were able to validate the vote for that part of the process. 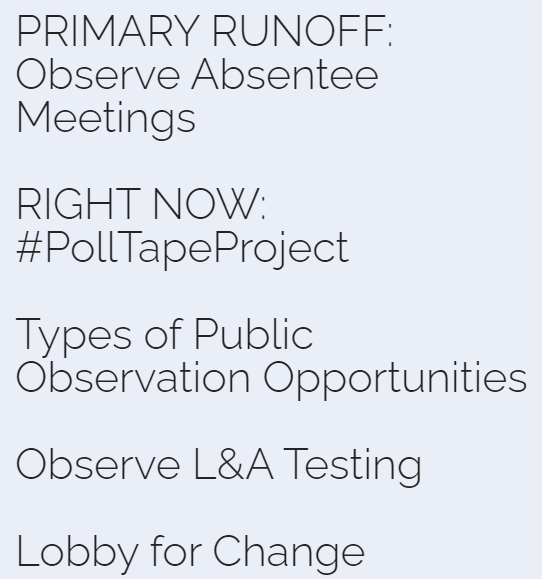