These are the people’s elections & we need your help verifying the receipts.

Why:
watch 1 min video below to understand why the public should verify the zero tapes and results tapes
read Justice Department

How:
1. Read through ALL the information on this page
2. Watch video of how to use the ‘Actual Vote’ app
3. Download Actual Vote for iPhone or Actual Vote for Android
4. Print legal statutes and affidavit form
5. Register in advance for training session - we will use app on grocery receipts for practice at training
6. Test app at training session by using a cash register receipt *.
7. Schedule a time at county BOE office to image tapes from previous elections and logic & accuracy tests
8. Image zero & results tapes on election day and election evening
All the tapes will be accessible by the public after they are uploaded

POLL TAPES DID NOT MATCH

Susan Pynchon, founder of Florida Fair Elections Coalition, shows why the public should verify that totals on the results poll tape match the vote totals that are reported to the state. This short clip is from the documentary "Hacking Democracy". Although the documentary is older, the same type of technology with the same vulnerabilities are still in use throughout the US and in NC.

Why should we observe/photograph the zero & results poll tapes?

Here is one instance where insider fraud may have been detected had the public made an effort to observe/photograph the zero & results tapes.

Find out if your county and state illegally destroying election records.
When a ballot is scanned, the tabulator takes an image of the ballot and the software creates a cast vote record (CVR) of each ballot and then allocates votes into a cast vote record database (CVR-DB). The zero & results tapes will show if your county is saving or destroying ballot images. According to the Justice Department, it is illegal to destroy ballot images and CVRs. 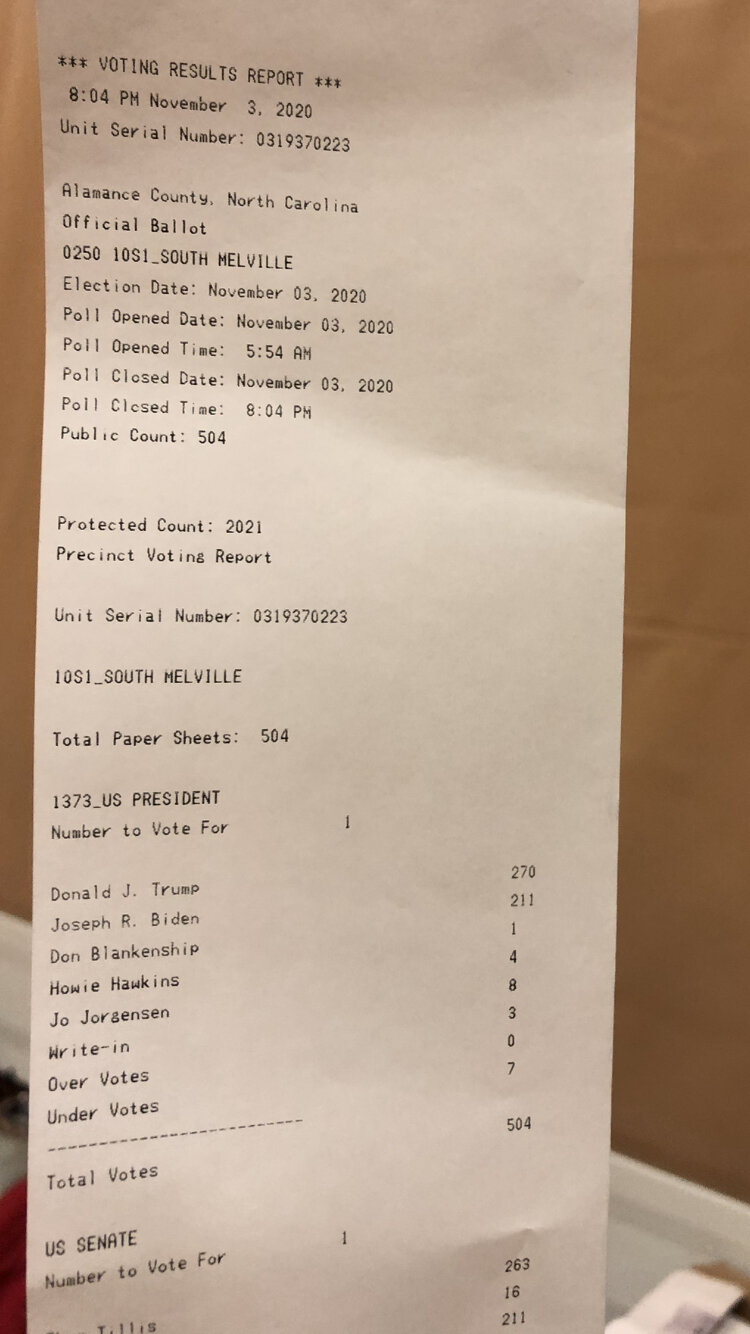 Images uploaded to the Actual Vote app are posted publicly soon after they are uploaded.

Many results tapes have already been posted from NC counties for the 2020 election and can be found at: https://av.democracycounts.org

We have volunteers who check the totals of every tape uploaded via the app and compare those with the totals the State BOE reports to the public.

Along with the poll tapes, the tabulators also have USB sticks that contains the electronic vote totals. These totals are loaded onto the county Election Management System (EMS) at the county BOE building on election night.

Sometimes errors occur when the USB sticks containing vote totals are loaded onto the EMS. Hacking, computer glitches, or even bugs can alter the electronic vote totals. The public gains confidence in the outcome when we are able to verify the vote count at all levels.

*Caveat about Actual Vote App
Right now the app is set up for GA elections. NC can and should continue to use the app. Just fill in the precinct name and number and ignore the GA specific fields. The images will all go to the same place online and have NC only information.

GO TO ANY PRECINCT POLLING LOCATION
1. Hand the Chief Judge, Judges, or poll workers this legal information sheet.
2. Ask to be let in to see the zero tape being generated and to see the process of ensuring that no votes are already loaded into the system, either physically or digitally.
2. Take a video of the process, including the tabulator, as it is printing the zero tape. There is no photographic prohibition of this public process since there are not yet voters inside the polling location. Make sure to not interrupt the process in any way.
5. Take a video of the tabulator as it is printing out the zero poll tape.
6. Use the Actual Vote App to take a photo or short video of the zero tape.
7. The zero tape should not be removed (torn off) from the scanner until after tabulation of votes and printing of results tape(s).
8. If you are denied entry into the voting enclosure, do NOT try to go inside without permission from a poll worker. Remain calm and video tape or audio record your interaction if possible. Remember, do not lose civility! Stay calm and be polite.
9. Fill out this affidavit form and send via email to Lynn at TransaparentElectionsNC(at)gmail.com.
10. Consider filing a formal complaint against the county BOE where your right to observe was denied.

GO TO ANY PRECINCT POLLING LOCATION
1. Get in line after the last voter - stay outside the voting enclosure at this time.
2. Hand the Chief Judge, Judges or poll workers the legal information sheet in case their county did not inform them of the public's right to witness the vote count.
3. Let them know you are not there to vote, but are there to see the tabulation of votes. Let them know you will wait outside until the last voter has placed their ballot in the scanner and left the voting enclosure. Ask that a poll worker come let you inside once the last voter has left so that you can “witness the vote count”.
4. It is okay to take a video or the process, including the tabulator, as it prints the results tape. There is no photographic prohibition of that public process since there are no longer voters inside the polling location. Make sure to not interrupt the process in any way.
5. Use the Actual Vote App to take a video of the results poll tape after it has been printed.
6. If you are denied entry into the voting enclosure, do NOT try to go inside without permission from a poll worker. Remain calm and video tape or audio record your interaction if possible. Remember, do not lose civility! Stay calm and be polite - it’s already been a long day for poll workers, who may not have been informed about your right to observe.
7. Fill out this affidavit form and send via email to Lynn at TransaparentElectionsNC(at)gmail.com.
8. Consider filing a formal complaint against the county BOE where your right to observe was denied.

GO TO COUNTY BOARD OF ELECTIONS BUILDING/WAREHOUSE
Counties can legally begin to tabulate votes from early voting sites and absentee ballots starting at 2pm on election day. Once tabulation occurs, the tabulator generates a results poll tape That tape has all the vote totals from early voting, including the number of over-votes, under-votes, as well as tabulator configuration information. Those tapes become public record after the polls close on election night. Unfortunately, Wake County BOEs kicks everyone out after printing the tapes/reports at 2pm and will not allow the public to stay until the polls close to view/photo/video the tapes. The next time we are allowed in is during the canvass.

1. Go to the BOE meeting held on election night.
2. Make sure to not interrupt the process in any way.
3. Ask to see the early voting poll tapes & absentee tapes/reports. It may be too hectic for the ED to set up a space for viewing poll tapes.
4. Use the Actual Vote App to take a video of the results poll tapes.
5. If you are denied seeing the tapes. Remember, do not lose civility! Stay calm and be polite.
6. Ask when you can come back to image all the poll tapes/reports. This should be done as close to the election as possible.

YOU HAVE A LEGAL RIGHT TO WITNESS THE VOTE COUNT

Transparent Elections NC has been trying to get a clarification from the State Board of Elections & some county BOEs to ensure that their poll workers understand the public’s right to observe the opening of the polls and closing of the polls. Here is a letter from TENC to SBE from October 2020asking for clarification.
No response was ever given. It’s been 2 years. 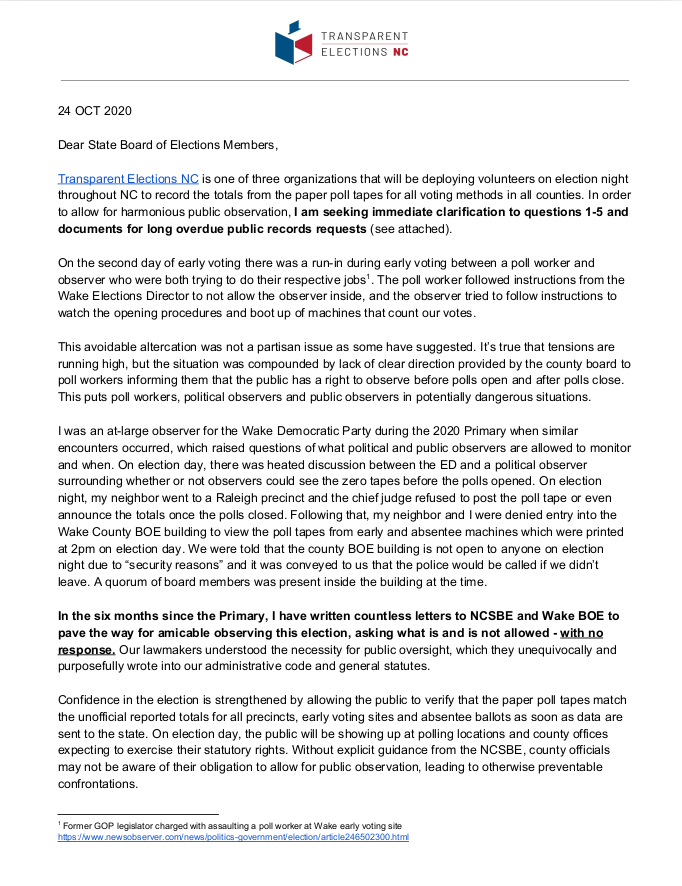 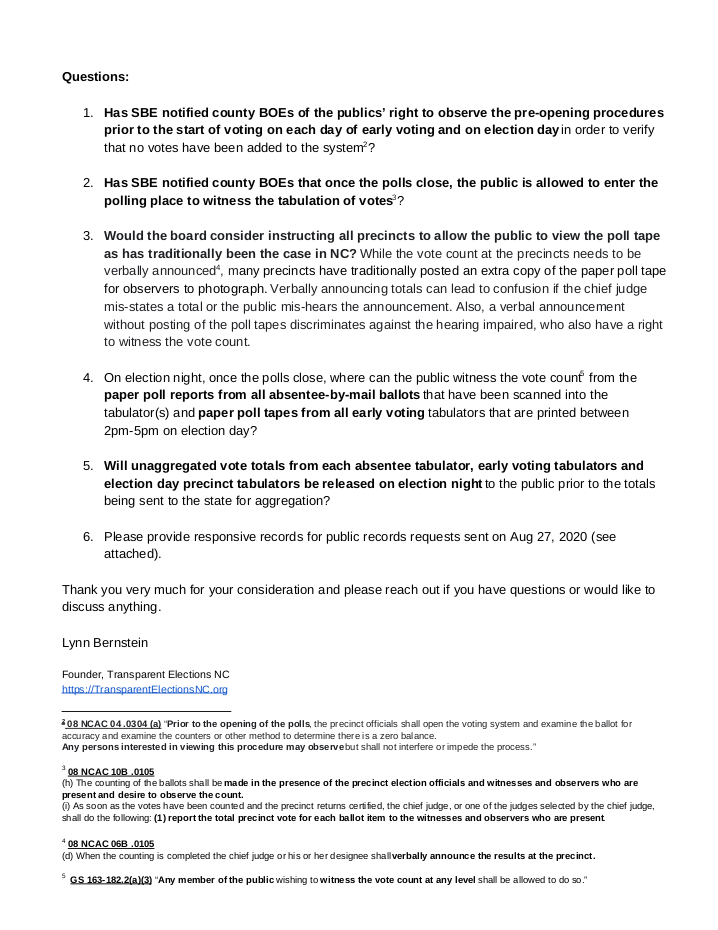 OPENING OF THE PRECINCT POLLING LOCATION:

If the system prints a zero tape or other paper document, the document shall be maintained and secured in the manner prescribed by the manufacturer and the county board of elections.

CLOSING OF THE PRECINCT POLLING LOCATION:

(a) The initial counting of official ballots shall be conducted according to the following principles:

NC Administrative Code 08 NCAC 10B .0105
(h) The counting of the ballots shall be made in the presence of the precinct election officials and witnesses and observers who are present and desire to observe the count.
(i) As soon as the votes have been counted and the precinct returns certified, the chief judge, or one of the judges selected by the chief judge, shall do the following:     (1) report the total precinct vote for each ballot item to the witnesses and observers who are present.

NC Administrative Code 08 NCAC 06B .0105
(d) When the counting is completed the chief judge or his or her designee shall verbally announce the results at the precinct.

NC STEPPS Manual: Ballot Counting
7. Any member of the public wishing to witness the vote count at any level shall be allowed to do so. No witness shall interfere with the orderly counting of the official ballots. Witnesses shall not participate in the official counting of official ballots. The precinct facility should not be locked so as to prevent public access to the count.