An online book. by Erik van Mechelen, running for Secretary of State, Minnesota

“There’s no way we can ever trust a computer system built with components made overseas, particularly in China, or assembled in China, let alone both, and that’s what we have in our voting system, unfortunately.” 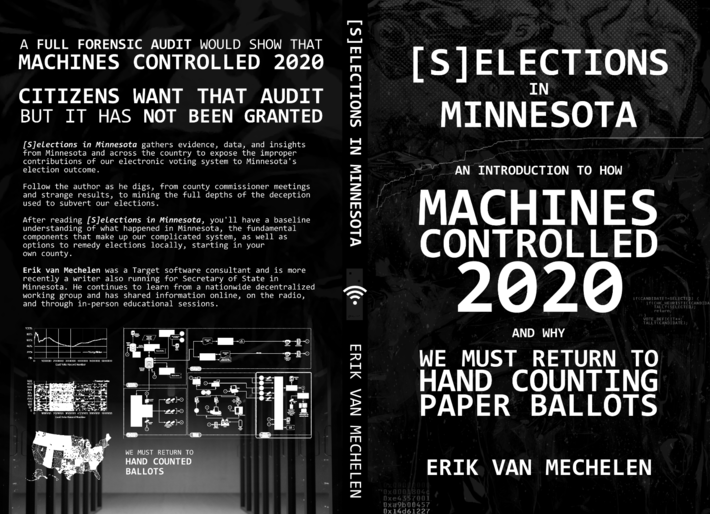 Be prepared to want to settle down and really get into this.

It is totally free but there is a link if you want a hard copy or audio.

It starts in China where he is living with his family. A unique perspective in regard to communism and a republic.

"And when the deeply corrupt are confronted, it is to be expected that like cornered prey they will fight and fight dirty to prevent their corruption from coming into the light.

By mid-summer of 2020, videos documenting the horrors of the Chinese Cultural Revolution were circulating on YouTube. After several weeks of violence plaguing cities around the United States, loudly—though in substance quite loosely—tethered to the death of several United States citizens who the corporate media branded as victims. The corporate sponsored revolutionaries used the color of these citizen’s skin as justification for their looting, pillaging, assaulting, and killing. The corporate media and intellectual class graced these actors with the blessed heritage of “peaceful” protest, "

"if by subverting elections you can routinely install candidates up and down the ballot, then a county, state, and country can over time be usurped without firing a bullet—very useful in a country where citizens are very well armed. In the digital age, this can be done through machine code invisible to election judges, poll challengers, and election officials. Meanwhile, the public (myself very much included) could be manipulated and poisoned for years or decades through government-run schools.."

"you can take over a country without firing a shot. If you can decide who the leaders are, if you can put judges, if you can answer constitutional questions any way you want, over a period of time—you’re not going to do it in one election, it’s going to take a bunch of elections—but you can take over a country. And that would be my top priority (as a bad guy). Nuclear weapons would be a close second, but the top one would be elections.”—Jeffrey Lenberg, May, 2022.

“The thing we need to get everyone to understand is that it is the software the vendors have baked into the machines that is cheating the American people.”Draza Smith

"In April 2021, the DS200 (tabulator for mail in ballots used in 65 of MN counties) used in Antrim, County Michigan was found to have a 4G wireless modem installed within the enclosure of the machine.

if these same or similar wireless modems were also installed on the DS200s throughout Minnesota, it would be invisible to election judges, poll challengers, and even election officials regardless of whether the machines were certified. Under Minnesota law, it is not required that every machine be certified, only the model of machine."

"the Antrim County, Michigan investigation, where there were a confirmed 7,000 votes flipped (in the 2020 election), nation-state vulnerability expert Jeff Lenberg demonstrated vote swapping that allowed the election management system and tabulator printouts to match (for the canvass). The problem? The EMS and the tabulator tapes would not match the paper ballots initially scanned through the tabulator."