Florida News Report has been on fire and telling it like it is.. Read their past articles also. 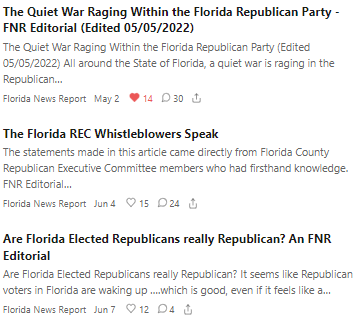 After receiving overwhelming response from Republicans around the state and expressing the difficulty they are finding in joining their county Republican Executive Committee (REC), a pattern that may be emerging.

Republicans from multiple counties reported that from within their RECs, the decision to start vetting prospective members was made. Their original understanding was that Republican voters have to be members of the party for one year before they can join their local REC and that is the only criteria. One Charlotte County REC member sent FNR the following statement:

“This war between the Establishment and the constitutional and limited government grassroots has been going on for decades.  I encouraged about six of the strongest campaign workers that I have ever worked with in our county (with an average age 25 years younger than the controlling group) and the chairman at that time threw their paperwork out because they were "strangers." Now you have to have a sponsor and go through an interview process to get into the REC. I know of at least one couple that was denied membership. I recently heard the Chairman just recently kicked a candidate out of an interview because he didn't like what that candidate had to say.”

Frustrated Republicans from more than seven Florida counties have reported their applications have been lost, “left at home” of a board member or just appearing to be slow-walked.

One Republican sent FNR an email with a video of their recent Volusia REC meeting:

“Republican Executive Committee of Volusia County (RECVC) Chairman Paul Deering showed his true self last night when pressed to explain why I (a Volusia County registered Republican with over 2.5yrs residency), was not being sworn in 4 months after submitting my Precinct Committeeman application for a precinct with positions available.

Mr. Deering announced a new "Vetting" procedure for Committeeman/woman applicants at the previous meeting in May but did not offer an explanation as to why he felt it was necessary to arbitrarily augment the state statutes; nor did he bother to explain what the vetting procedures were.

It is important to know that after I left last night's meeting a Precinct Committeeman asked Mr. Deering what the parameters of this vetting procedure were.

He refused to answer.

It is well past time that true God Fearing, America First, Constitutional Republicans wake up, look around and see what Establishment Republicans are doing to keep their RINO brethren in power.

They repeat the old Reagan 80/20 rule and berate you into believing that you’re dividing the party if you call out anyone with the (R) after their name for being weak and influenced more by special interest groups, lobbyists and woke corporations than their constituents.

You don’t have to look very hard to find these swamp creatures working overtime to destroy the lives of candidates who dare challenge their right to continue on the path to more and more power and autonomy.  If the definition of insanity is doing the same thing over and over expecting a different result; let's stop the insanity and primary these pseudo-Republicans out of their entitled positions.

“Bringing the Republican Party back to its roots is not divisive or destructive.”

It’s the only chance we have at saving our country!  Get off the sidelines, quit complaining and DO SOMETHING ABOUT IT!” Please open the link and watch the video for yourself:

(Note: this video is 1:44 min long and it is obvious that the old guard is not letting in some members for their own reasons AND the chairman says it! This link is only good to July)

It could be that some of the REC boards are not prepared for adding new members, or have poorly trained those tasked with facilitating membership. It could be just a coincidence.

However, consider this: the result of the 2020 Election didn’t ignite the Republican Establishment in outrage.

They were delighted to be done with Trump.

It’s the conservative Republicans who have been furious - and have subsequently flooded Florida county RECs with new memberships. If you have attended these meetings, you will hear them give their reasons for wanting to join their local REC - and Trump, the result of the 2020 election, the direction of the country, and election integrity are all being talked about by this group of Republicans.

The Republican Establishment however doesn’t want to talk about the 2020 election result, MAGA, Trump or election integrity.

Could the membership issues be about the Primary?

With so many Republicans wanting to get involved, one would think that the Republican Party Of Florida would want to capitalize on getting these folks plugged into all the empty Precinct Committeemen and Committeewomen positions open to help the best Republican candidates win…..in the August 23rd Primary.

What does a Republican Primary Get You?

In 2016, remember the crowded Florida Republican Presidential Primary? Some of those candidates could be described as “Republican Establishment” candidates who would maintain the status quo. Whether tone deaf or just clinging to the past, they misjudged their Republican voters at a time when those voters were motivated to vote against what was identified as “The Swamp.”

Republican Establishment candidates, Chris Christie, Jeb Bush, and John Kasich all wanted to stay on the Republican talking points, avoiding the very issues they needed to come out strong on to win that Presidential Primary.

There was one man at that time who was NOT going to regurgitate the Republican talking points to the ire of party leadership and that was Donald Trump. His willingness to talk about the real issues made it clear that he was more in touch with the concerns and priorities of most Republican voters.

2016 proves you can get a REAL Republican in a Republican Primary, but only if you’re paying attention.

So that brings us to the Florida August 23rd Republican Primary

It’s an election year. Election years send politicos scrambling to find volunteers to make calls and knock on doors for their candidate of choice and one of the first places these campaign staffers hit up is….. the local Republican Executive Committee meetings.

It makes sense that the county GOP would not only be thrilled to have doubled their number of members in an election year to help the candidates, but it’s also part of their mission statement to get Republicans get elected unless there is something more going on here we don’t know about?

Why would county RECs slow down admitting new members BEFORE the August 23rd Primary?

The August 23rd Primary present two different futures for the Republican Party of Florida in the two types of Republican candidates - just like the 2016 Presidential Primary:

The Republican Conservative Candidate: a True Believer: This candidate compares his campaign to a “calling” not a profession. Support the Republican Party Platform.  Often promises to term-limit himself.  Self funded campaign or funded by small donor dollars. Considers Professional Politicians the Problem in the Party.

The August 23rd Primary is the opportunity for Florida Republican voters to be heard by THEIR OWN PARTY from the State level down to county. But with only a 30% Republican voter turnout, the Republican Establishment candidate only has to target the Republican Super Voters to win the Primary and retain control of the seats up for grabs. And they have the money to do it.

One could speculate that by keeping conservatives from campaigning for the Republican conservative candidate during the Primary through the RECs, that may be the driving force to keep new members out…. Until after the Primary.

Pay close attention and see if those members are quickly admitted into the county RECs around the state right after the Primary election. FNR has been told by two whistleblowers in two counties that their county’s REC board stated they aren’t motivated to GET OUT THE VOTE for the Primary - they are only focusing on re-electing DeSantis in November.

On August 24th, we will know if the Republican Establishment has retained control of Florida or if they have been put on notice that it’s a new day in Florida.

You get to decide.

Defend our Union/Defend Florida is a grassroots, citizens organization. We are not incorporated, we are not a non-profit and we do not fundraise. It is a citizen-driven movement designed to protect Americans from Federal government overreach and to ensure election integritly. We are a non-partisan community. From time to time, our community will find out about an American First, candidate and our community will share information about America First Candidates regardless of their party affiliation. If you have a candidate that is America First (Democrat, Republican, Independent, or other), please let us know by contacting us via our website.