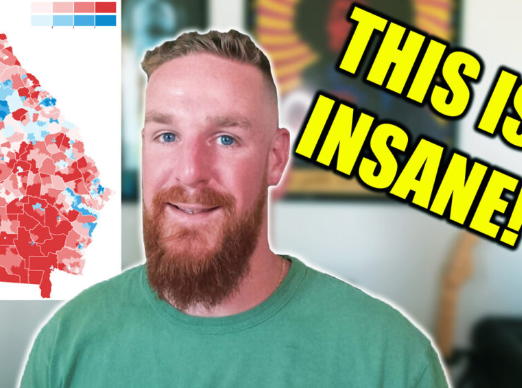 GEORGIA – Commentator Nick Mosedar delved into another installment of the controversies surrounding the primary elections out of Georgia, detailing how election results had to be recertified in both Cobb and Fulton counties due to egregious errors in how votes calculated through Dominion voting machines wound up being incorrectly tabulated.

Mosedar first dove into the conundrum that occurred in Cobb County, sharing a video featuring the county elections director explaining during an emergency meeting how several thumb drives containing full-blown ballots were simply not uploaded following the closing of the polls during the county’s primaries.

Thus, a re-tabulation and recertification had to be conducted in the county to account for the over 2,000 ballots missed the first time around. Mosedar remarked on just how insane it is that people simply forgot to upload these thumb drives in the first place.

“They had the thumb drives in their possession, they just chose not to upload the thumb drives, which means that 2,203 ballots – not votes – but ballots were not counted in Cobb County. So, they had to have a special meeting to recertify the new election results. But they said that you know, this error didn’t affect the outcome of any of the elections. And I don’t know if there’s any proof of that we just have to trust them. So that’s Cobb County.”

Mosedar then brought up Fulton County hosting their own recertification, which Red Voice Media reported on, and little information was offered on why the county needed to recertify May’s primary results.

And as it turns out, the recertification came from, once again, uncounted ballots.

“Now Fulton County also had to have an emergency meeting to recertify their election results. Why? Well, because apparently when they closed the polls, some of the election workers forgot to download the results from the machines. Dominic, a former Dominion employee who now runs the EMS in Fulton County, tells us that the precinct managers transferred the wrong files onto the thumb drives, which didn’t include the actual results.”

After sharing a clip featuring Dominic explaining the snafu out of Fulton County, Mosedar asserted that he’d spoken with individuals who are familiar with these Dominion machines and stated that his sources claimed that the excuse Dominic delivered was “utter BS.”

“Now I’ve talked to some people that are very technical and know a lot more about these systems than I do. And they said, this explanation from Mr. Dominic is just utter BS, it makes no sense whatsoever. And here’s the worst part about it all, is they didn’t even tell us how many ballots were affected. They didn’t give us any numbers. They just basically said that this happened, and it didn’t change the outcome of the election. So, no big deal. We’re just going to recertify it.”

As mentioned earlier, this latest revelation from Mosedar serves as the second installment on election funny business coming out of Georgia. Red Voice Media previously reported on Mosedar’s findings out of DeKalb County.

More info can be found at: