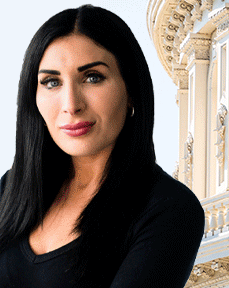 I want to say thank you to all of my supporters, all of my volunteers, and my staff for their hard work on my campaign and the faith all of you amazing patriots put in me throughout this race. I am so sorry that I didn’t post anything last night or earlier this morning. But, as you can imagine, I am devastated, and I am utterly heartbroken and saddened over the state of our country, our Republican Party, which is an active participant in the voter fraud machine here in America.

As you all saw last night, the Laura Loomer For Congress campaign had the nation on its heels because the entire night, I was ahead of Daniel Webster, beating him in the election. Then, there was a very strange long pause in the counting of votes while I was still ahead of Daniel Webster. And then all of a sudden, a drastic shift in numbers at the 11th hour occurred after the Supervisor of Elections websites crashed (while I was ahead in votes).

The media was at my party. They were all reporting that I was expected to win. And everyone saw all night I was beating Daniel Webster, against all odds in our rigged election system.

I just want you all to know OUR FIGHT IS NOT OVER.

I DO NOT CONCEDE. And I encourage all of my supporters and and all of my voters to NOT support Daniel Webster and the corrupt ESTABLISHMENT RNC and Big Tech voter fraud machine that is propping his feeble body up and depriving my constituents of the representation they deserve and need. I am calling for Daniel Webster to RESIGN, because everyone knows he is beyond unfit to serve. He didn’t campaign. He refused to debate me, and it’s because his health is worse than Joe Biden’s.

I weep not for myself, but for our country and the constituents of Florida’s 11th District who do not have a Congressional Representative as a result of voter fraud, illegal Big Tech election interference, and RNC corruption.

Please make me one promise:

And I’ll never stop fighting for you to have your voices heard and your votes counted.

Thank you so much. I love you all.

August 24, 2022. Everyone should be outraged by the Republican Party’s refusal to address big tech election interference, which is a form of blatant voter fraud.

How can anyone who cares about election integrity continue to support a party that refuses to address big tech election interference, especially after Big Tech banned Donald Trump while he was still in the White House?

Why does the party accept, tolerate, and participate in this voter fraud?

The Laura Loomer For Congress campaign is the first and only campaign in the nation in US history to be banned on all social media.

We consistently outworked and outfundraised Daniel Webster every single quarter BY A LOT, and yet the GOP continued to silence our campaign with the help of big tech in the supposed “free state of Florida” (what an absolute myth that is), where big tech is allowed to get away with illegally interfering in our elections WITH ZERO CONSEQUENCE DUE TO A LACK OF REPUBLICAN LEADERSHIP.

Not a single elected Republican in Congress came to our defense or bothered to speak out about this voter fraud and election interference despite photographic evidence of bias. And not a single Republican who claims to be a fighter in congress spoke out about Daniel Webster wearing a life alert, his lack of support for President Trump, and his record as the 7th most absent member of congress.

NOT A SINGLE ELECTED REPUBLICAN IN CONGRESS HAD THE INTEGRITY TO SPEAK OUT ABOUT THE BLATANT ELECTION INTERFERENCE IN OUR RACE.

NOT A SINGLE REPUBLICAN IN CONGRESS UTTERED A WORD ABOUT THE INJUSTICE WAGED AGAINST OUR CAMPAIGN.

How can anyone have any respect for the Republican Party in its current form when they are so intellectually dishonest, hypocritical, and deceitful?

I want you all to know these facts so that you know why I can’t, in good faith, encourage any of you to waste your time campaigning for any Republican ahead of the upcoming elections in November.

Our party is rotten to its core and your elections are rigged and corrupt. My election has proven this to the entire world.

Not a single elected official came to our defense. Nobody in the Florida legislature spoke out about this blatant election fraud in Florida despite our many pleas for someone to do something.

People mocked me and many in our own party said I was not a a viable candidate simply because of the bans. They are guilty of perpetuating voter fraud and big tech election interference.

Big tech and digital media plays a huge role in communicating with voters.

In good faith, I can’t continue fighting for a party that refuses to address big tech election interference and voter fraud. I can’t encourage all of you to keep fighting for a corrupt party that is complicit in blatant voter fraud while these frauds in our party keep lying on TV saying they are going to “fight for you” while they work to deprive you of free and fair elections.

The GOP leadership is full of liars who are complicit in voter fraud. I refuse to support their corruption.

The Republican Party doesn’t care about your vote enough to protect it in its entirety. They campaign against America First candidates like myself so they can continue their corruption and drive our country into the ground.

Given that you all see this, and we all know it to be true, why should any of you continue to care about the Republican Party?

Until proven otherwise, and This comes from my heart, the current Republican Party isn’t worth fighting for anymore.

August 25, 2022. BREAKING: I am told that Daniel Webster is planning on making an early exit in the Winter and a decision has already been made in Lake County, Florida for who Dan will announce as his successor for a special election in the Spring of 2023. That means the people don’t get a vote, and THIS IS A CRIME.

That means the political GOP establishment is hand picking and assigning who gets to serve in public office. The corruption goes all the way down to your back yard.

I’m told Dan Webster knowingly and intentionally undermined the integrity of the Primary election while knowing that he was not going to serve the full term because he is too sick to do so.

Whoever their pick is, I am going to obliterate them. I will destroy whoever the establishment picks. I don’t care who it is. I will run a campaign against them because their actions are the epitome of CORRUPTION AND ILLEGAL ELECTION INTERFERENCE.

This is my seat and I’m taking it. I will EXPOSE AND DESTROY anyone who is involved in this corrupt activity of hand selecting their successors. I don’t care who goes down as a result, but I will do everything in my power to expose the GOP’s illegal election interference and political crimes in Florida’s 11th district.

I want people to go to jail.

I will never concede to corruption and election interference.

Laura Loomer, 28, is a Jewish Conservative investigative journalist and activist. Originally from Tucson, Arizona, Laura began her journalism career working as an undercover journalist for Project Veritas from 2015-2017. Loomer’s investigations have uncovered fraud and corruption within the Hillary Clinton campaign, Islamic extremism on college campuses, the Las Vegas Shooting, flaws and loopholes within the U.S. immigration system, and widespread voter fraud throughout the U.S.

Loomer has traveled all around the world for her investigations, and she is mostly known for her Guerrilla style journalism and often conducts ambush interviews on live stream, which is known as getting “LOOMERED”. Some of the people she has confronted on camera include: Hillary Clinton, Chelsea Clinton, Huma Abedin, James Comey, Maxine Waters, Ilhan Omar, Rashida Tlaib, Alexandria Ocasio Cortez, Michael Avenatti, Tim Kaine, Linda Sarsour, Alyssa Milano, and former DNC chair Keith Ellison.

Because of her effectiveness, Loomer was targeted by the Left and Big Tech, and is banned on nearly every single social media platform, including Facebook, Twitter, Instagram, Uber, Lyft, Uber Eats, PayPal, Venmo, GoFundMe, Medium, TeeSpring, and even Chase Bank shut down her access to her online banking!

Loomer, who is and always has been a loyal supporter of President Donald J Trump, has continued to fight for free speech and First Amendment rights for all Americans.

Loomer is running for Congress in Florida’s 11th Congressional District. She looks forward to representing her constituents in Congress 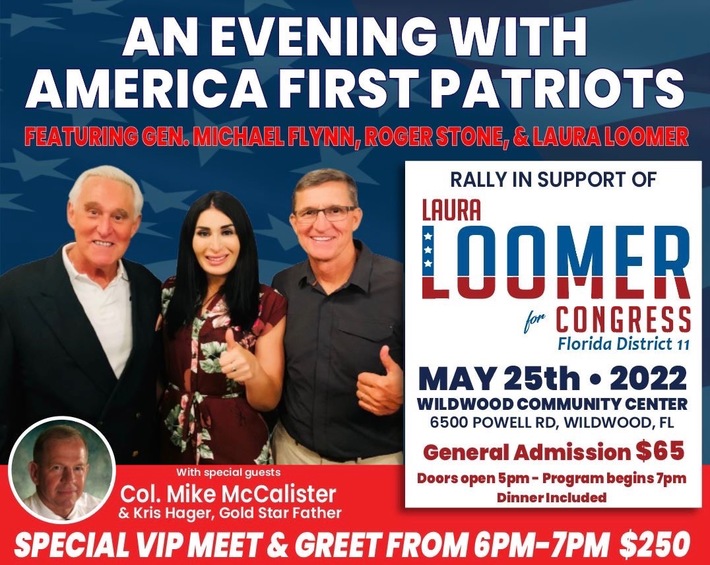 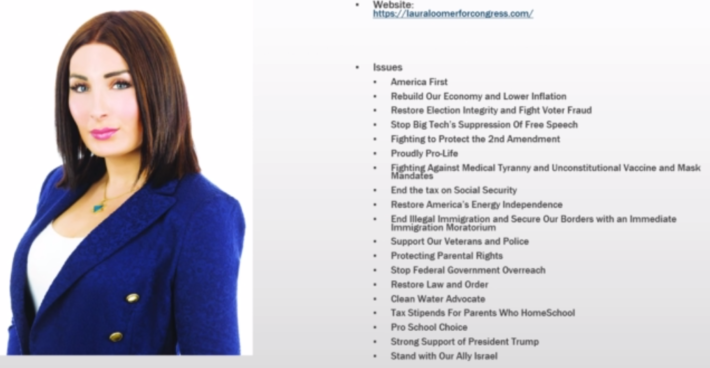 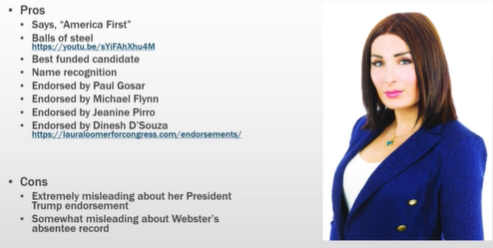