With God, all things are possible

I Believe In The American Dream

I’m the great-grandchild of European immigrants, and the grandchild of war veterans. I was born in 1979 on Veteran’s Day in Toledo and grew up in the old Polish village, right off Lagrange Street.

I graduated from Calvin M. Woodward, joined the United States Air Force, got a master’s degree and certification in Project Management, and spent many years in both the Nuclear and Automotive Industry.

I know what it’s like to work hard and achieve the American Dream and I want to keep the same opportunity available to all of you!

Politicians need to stop telling us, “We can’t,” and start asking us, “How can we help?”

Throughout my career in the nuclear, construction and automotive sectors, I have successfully demonstrated my ability to team-build and lead thousands. These hard-working professionals regarded me as their peer and we were equal in friendship. However, when it was time to put in work, I was their leader and they were my teammates. Confidantes marching toward a common goal, sharing in strife and glory. As a leader, I was only ever as good as my team.

I am a common-sense conservative, a “Rush baby”, who wholeheartedly believes in the founding principles of the Republican Party: “REAL PATRIOTISM IS A WILLINGNESS TO CHALLENGE THE GOVERNMENT WHEN IT’S WRONG.” – RON PAUL

In Congress, I will put AMERICA FIRST, ALWAYS

I believe that Fair Elections are a cornerstone of our Republic and that we must secure our elections, by returning to paper ballots, cleaning the voter rolls, banning ballot drop boxes and requiring voter photo identification.

The American people must defend innocent life and upholding the Judeo-Christian values of our founding. I will support all legislation that protects life in the womb. I believe in life at conception, and I believe our laws should protect all living souls, including those who are the most vulnerable.

I believe that the federal governments sole existence is to preserve the life, liberty, and property of its citizens. and it is instituted to protect the rights of individuals according to natural law. Among these rights are the sanctity of life; the freedom of speech, religion, the press, and assembly; the right to bear arms; the right of individuals to be treated equally and justly under the law; and to enjoy the fruits of one’s labor.

I believe that the federal government’s powers are limited to those named in the Constitution and should be exercised solely to protect the rights of its citizens.
I believe Congress must fulfill its constitutional obligations and cease the practice of delegating legislative powers to administrative agencies — legislation should be passed by Congress, not by unelected administration officials.
As Thomas Jefferson said, “The government closest to the people serves the people best.” Powers not delegated to the federal government, nor prohibited by the Constitution, are reserved to the states or to the people.

In order to restore its greatness, America needs a flourishing Ohio and that cannot happen without a safe, productive, and communal 9th district.

The Republican Party is raunch with lifetime politicians who are spineless and seek to serve themselves and the members of their exclusive “club”. We must fight to eradicate those within our party that seek to destroy it. We must hold them accountable to our Conservative principles and call them out when they cease to deliver.

I believe that America must sustain a strong military and stop committing to the endless wars of recent decades. The best way to ensure peace is through a strong national defense and America must always have the most powerful military on the face of the Earth.

I believe that American Energy Independence in critical to both our economic security and national defense. As a nuclear industry executive, I believe that America must develop an energy policy that ensures energy is affordable for our families, clean for our environment, abundant for our future, and domestic for our security.

I believe that the rule of law is the ultimate safeguard of our freedoms, and the Constitution means exactly what it says, as written. I believe that America is a lawful country, and our men and women of law enforcement are heroes who deserve our absolute support.

We need a leader, not a politician. Someone who can unify our communities and champion an effort to make both Ohio, and America great again. I am that someone.

I believe that families make the best decisions regarding their and their children’s health, education, jobs, and welfare. Not the government.

I believe that our public-school systems are failing our children and that all parents should have an opportunity to choose the best education available for their children.

I believe that America must secure it’s borders and stop illegal immigration. That means building the wall. But we cannot stop there.

I am aligned with the American public and have signed the U.S. Term Limits pledge.

Online platforms such as Facebook, Twitter and YouTube are utilizing their platforms to push political agendas. They are arbitrarily regulating free-speech in an attempt to stifle public discourse with a distinct focus on user with Conservative values. On June 5th, President Donald J. Trump, the 45th President of the United States, officially endorsed J.R. Majewski for Congress via an announcement on his official website saying the following: J.R. Majewski will be a fantastic Congressman for the incredible people of...

END_OF_DOCUMENT_TOKEN_TO_BE_REPLACED

FOR IMMEDIATE RELEASE J.R. Majewski sends an S.O.S to President Donald J. Trump J.R. Majewski, Republican candidate for Ohio’s 9th Congressional District, who made national news after painting a Trump banner across his entire front yard, placed a new painting on his...

END_OF_DOCUMENT_TOKEN_TO_BE_REPLACED

J.R. Majewski (R) responds to the appointment of his opponent Marcy Kaptur (D) to Select Committee on Economic Disparity and Fairness

END_OF_DOCUMENT_TOKEN_TO_BE_REPLACED 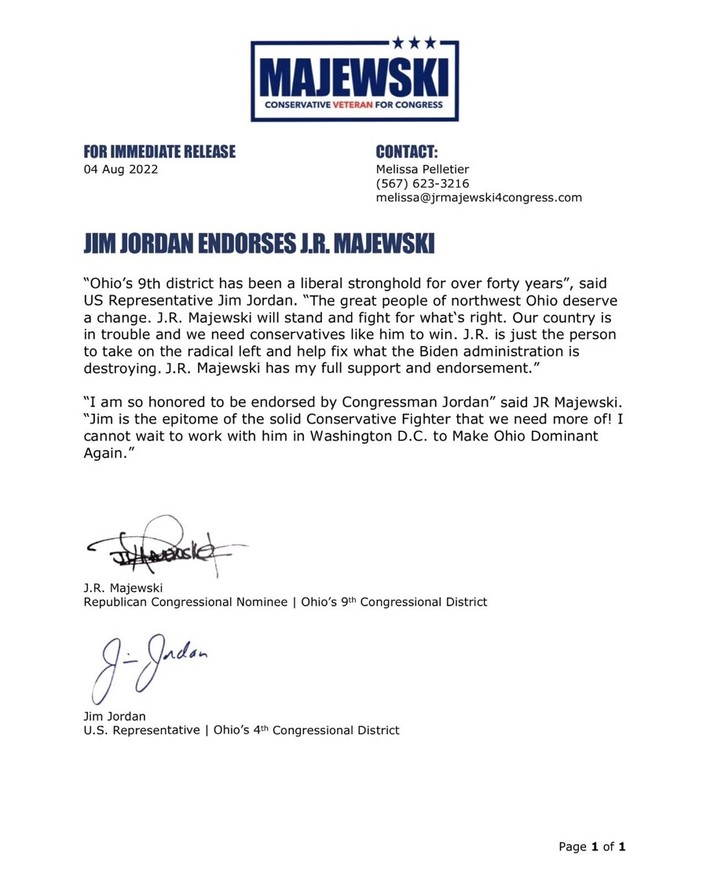