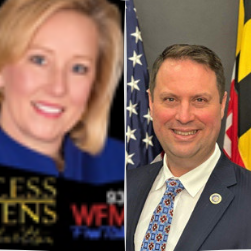 JENNIFER CHARLTON IS AN ENTREPRENEUR, COMMUNICATIONS CONSULTANT, AND RADIO SHOW HOST. HER BACKGROUND INCLUDESENTERTAINMENT SALES AND MARKETING NATIONALLY AND NONPROFIT MANAGEMENT. IN 2016 SHE WAS APPOINTED IN THE HOGAN ADMINISTRATION AS DIR. OF COMMUNITY OUTREACH AT THE DEPT OF HUMAN SERVICES (DHS) FOLLOWED BY (ACTING) DIRECTOR OF COMMUNICATIONS WITH BALTIMORE CITY DEPARTMENT OF SOCIAL SERVICES. (BCDSS). IN 2014, SHE RAN FOR COUNTY COUNCIL AT LARGE IN FREDERICK COUNTY MD. SHE IS A FORMER MEMBER OF THE BOARD OF THEMD FEDERATION OF REPUBLICAN WOMEN (MFRW), A FORMER MISSMARYLAND WITH THE MS. AMERICA PROGRAM, AND A PASSIONATEPATRIOT.

Dan Cox is a 16-year Constitutional attorney and 2020 member of President Trump's Philadelphia Lawyers for Trump team. He has served as an elected official in State and local government for over five years fighting government overreach and corruption including the latest disastrous gubernatorial lockdowns of small businesses, schools, and churches that caused over $1.2 billion in lost small business equity alone. His fight in the MD State House for election integrity and in Philadelphia for President Trump against the stolen PA election makes him uniquely experienced regarding keeping freedom by a lawful vote. He lives with his wife and children in historic Frederick County Maryland.