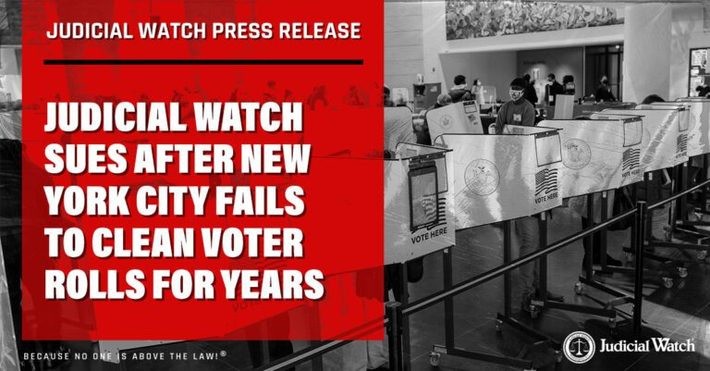 The NVRA requires states to “conduct a general program that makes a reasonable effort to remove” from the official voter rolls “the names of ineligible voters” who have died or changed residence. Among other things, the law requires registrations to be cancelled when voters fail to respond to address confirmation notices and then fail to vote in the next two general federal elections. In 2018, the Supreme Court confirmed that such removals are mandatory (Husted v. A. Philip Randolph Inst. (138 S. Ct. 1833, 1841-42 (2018)).

The Judicial Watch lawsuit details that New York City’s “own recent data concedes that there were only 22 total” removals under this provision “during a six-year period, in a city of over 5.5 million voters. These are ludicrously small numbers of removals given the sizable populations of these counties.” The lawsuit elaborates:

For context, the estimated number of voting-age citizens changing residence, per year, during the five-year period from 2016 through 2020, in the five counties of New York City was:

In all, “more than 600,000 voting-age citizens, per year, are estimated to have changed residence in New York City during the five-year period from 2016 through 2020.”