Election Integrity Network and Who's Counting with Cleta Mitchell is a project of Conservative Partnership Institute. We are a coalition of conservative leaders, organizations, public officials and citizens dedicated to securing the legality of every American vote. EIN is lead by CPI Senior Legal Fellow for Election Integrity, attorney Cleta Mitchell, a nationally recognized election law attorney, author, scholar and advocate. 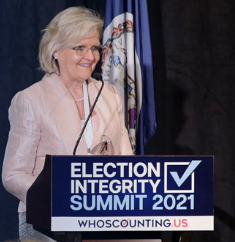 CPI is a nonpartisan, nonprofit organization located in Washington, D.C. It was founded in 2017 by former U.S. Senator and CPI Chairman Jim DeMint, and joined this year by former Trump White House Chief of Staff and former U.S. Congressman Mark Meadows, who now serves as CPI Senior Partner.

Making it “Easy to Vote and Hard to Cheat”

How To Become a Poll Worker