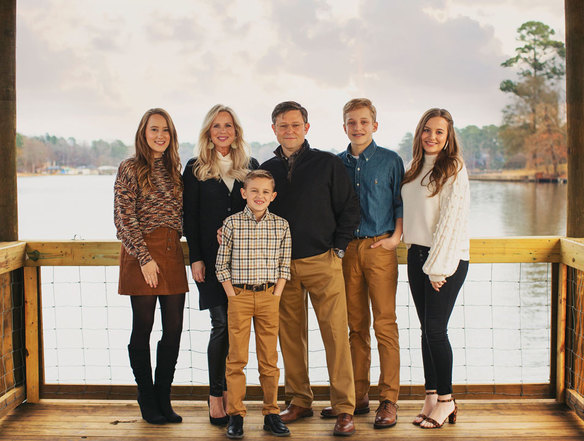 Mike is a dedicated husband and father of four, as well as a constitutional law attorney who has devoted his life and career to fighting for the fundamental freedoms and traditional values that have always been a priority to the people of Louisiana. Prior to his election to Congress, for nearly 20 years, Mike successfully litigated high profile constitutional law cases in district and appellate courts nationwide. He is widely recognized as a leading defender of the right to life, religious liberty, free speech, the Second Amendment and free market principles.

Mike has solidified his distinguished reputation as a principled, full-spectrum conservative as the representative for Louisiana’s Fourth District. He has also been a trusted ally of President Donald Trump and has been honored to receive his endorsement.

After less than four years on Capitol Hill, Mike was elected by his colleagues to serve as Vice Chairman of the House Republican Conference – one of seven elected leadership positions for Republicans in the House of Representatives and the fourth-highest ranking position in the Republican Conference. As Vice Chair, Mike helps lead his colleagues in fighting for core conservative principles by communicating these policies and ideas to the American public.

Prior to his role as Vice Chair, Mike was elected by his colleagues to lead the largest caucus of conservatives in Congress—the Republican Study Committee. For nearly a half century, RSC has been considered “the intellectual arsenal” and the policy shop for conservatives in the House of Representatives. Under Mike’s leadership, RSC is developing the conservative playbook for when Republicans retake control of the House.

In Congress, Mike was appointed to the prestigious House Judiciary Committee which handles important oversight responsibilities such as the questioning of key Biden Administration figures like Attorney General Merrick Garland and Department of Homeland Security Secretary Alejandro Mayorkas.  Mike was chosen to be the Ranking Member of the Subcommittee on the Constitution, Civil Rights, and Civil Liberties.

Mike also serves on the House Armed Services Committee, representing the many servicemen and women who live in Louisiana’s 4th Congressional District. In 2021, Mike was able to secure hundreds of millions in strategic federal investments for Louisiana’s military installations, creating good paying jobs for Louisianians, supporting our servicemembers, and bolstering our national defense in an increasingly unstable world.

Mike was elected to the state legislature twice without opposition and served in the Louisiana House from February 2015 to January 2017, before being elected to Congress. As a state legislator, he received top awards from business and industry, limited government, and pro-life and pro-family groups.

The eldest son of a Shreveport firefighter who was critically burned and permanently disabled in the line of duty, Mike learned early on the values of hard work, honor and sacrifice. He has a practical understanding of the challenges that small business owners face because he, like his parents and grandparents, was one himself. Mike has also served as a conservative talk radio host and columnist, a media spokesman for America’s largest religious liberty organizations, a college professor and constitutional law seminar instructor, and a board member for national organizations and numerous community groups and ministries.

Mike and his wife Kelly, a Licensed Christian Counselor and former school teacher from Webster Parish, have been married since 1999 and have four children, Hannah, Abigail, Jack and Will. Today, they reside in Bossier Parish.

Here is his funding. Fairly careful with citizen rights, but should be watched. Some RINO legislation that he dealt with unconservatively.

Voted for RC 98 -- Fueling Run-Away Spending by Overriding the Sequester Budget Restraints -- This bill further fuels run-away government spending by overriding the automatic spending cuts to Medicare put in place under the 2011 Budget Control Act, also known as the sequester. Specifically, the bill continues to exempt Medicare from sequestration (2% cut) until 2022 at a cost to taxpayers of $12.2 billion. The bill contains no other reforms or spending offsets. ACU believes the tea-party era sequester serves as one of the last hopes for fiscal responsibility, opposes Congress’s continual action of “kicking the can down the road” at a time when the national debt is set to exceed $30 trillion and opposed this bill.

Voted for HR 133 -- Advancing Cronyism and Out-of-Control Spending through a $2.3 Trillion Spending Package -- This spending package epitomizes the worst of the DC establishment’s spending habits. This bill was sold as a COVID-19 response package but actually includes $1.4 trillion in budgetary spending unrelated to the pandemic. The remaining $900 billion was supposedly directed to government responses to the Chinese coronavirus (COVID-19) outbreak. Negotiated in secret, without the opportunity for elected officials to offer amendments, this 5,593-page omnibus is the longest bill ever passed by Congress and comes just months after the passage of the CARES Act, another $2.2 trillion spending package. The bill contains carve-outs for every imaginable special interest group in the “swamp,” from tax breaks for racehorse owners to $10 million in funding for “gender programs” in Pakistan. While the bill provides $600 direct payments to children and adults earning up to $75,000 a year, the bill represents a cost of $6,925 (plus interest) per every American. ACU believes it is appalling that Congress continues to pass reckless deficit spending while providing lawmakers and the public mere hours to even read the proposals and opposed this bill.

Voted against HR 6147 -- Prioritizing Government Land Maintenance instead of Land Acquisition -- The Biggs (R-AZ, ACUF Lifetime 92.3%) amendment to a multi-agency appropriations bill transfers funds from the Bureau of Land Management land acquisition account to the National Park Service maintenance backlog account. The federal government owns roughly 28 percent of all the lands in the United States and the National Park Service's deferred maintenance backlog currently tops $12 billion. ACU believes it is absurd for the federal government to continue to acquire land when it can't manage the enormous land holdings already under its control and supported this amendment.

He has a decent record of conservatism out of 144 votes and he has only voted against the American Conservative Union 11 times.

He does love to spend the citizens' money. He is a very high spender of almost $3Trillion. 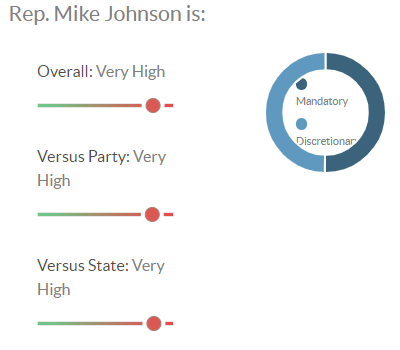